Mick is a 5 months old pup FCI registed. He is very natural on the sheep amd showing good balance. His grand father Richard Hutchison’s Sweep proved his quality on the trials fields (reserve supreme 2015, 3 at the world 2014, english national champion 2013,3 times international brace champion…). The two grand mothers of Mick produced remarquable dogs. Homeland Jan is the mother of fly who won the international brace in 2014 and Rose have bred R.Millichap’s Don. Eugeen Keenes’ Grimm is also a fabulous dog, good combinaison of power and style. Pearl, the mother of Mick will certainly run the european nursery 2016 with Nicolas. Lad has been buy by a trialer and farmer in UK. Mick is a very good nature who like children and enjoy everything. 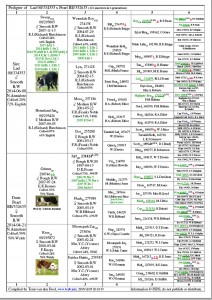